Many awesome things have come out of Japan, there is absolutely no doubt. One of the best things? Sushi! Simple in construction, yet devilishly hard to get just right – sushi is a versatile and tasty dish that is enjoyed around the world.

Putting aside the slightly nonsensical story, this game unabashedly doubles down on its anime-inspired roots. The game starts with the catchy theme song featured in the E3 2017 trailer, which made me think for a short time that it was some kind of adaptation from a TV show. All the over-the-top zaniness of an anime is there and is undoubtedly charming. The bold lines and bright colours of the characters are appealing and eye-catching, and the voice acting isn’t obnoxious in the slightest.

One area where this game falls flat is when it decides to have a strange mix of design choices shoved together into one screen. As mentioned before, all the characters have bold outlines and bright colours, but most of the over-world outside of the cut-scenes are line-less 3D environments with the 2D characters layered on top. Compared with the cohesive style of something like Cuphead, it’s slightly disappointing.  Not a deal-breaker by any means as the presentation is very appealing.

The gameplay starts off super simple – collect as many plates of the same colour within bursts of seven-second slots. Each time you collect two or more plates they get added to your table. Once your table is full, your empty plates are automatically fired at your opponent. Every single stack of plates can be fired off manually too, so your shots can also more controlled if they need to be.  The higher your stack of plates – the harder it hits your enemy. Once your opponent’s health vanishes, you win the match! Obviously, your opponent is trying to do the same. 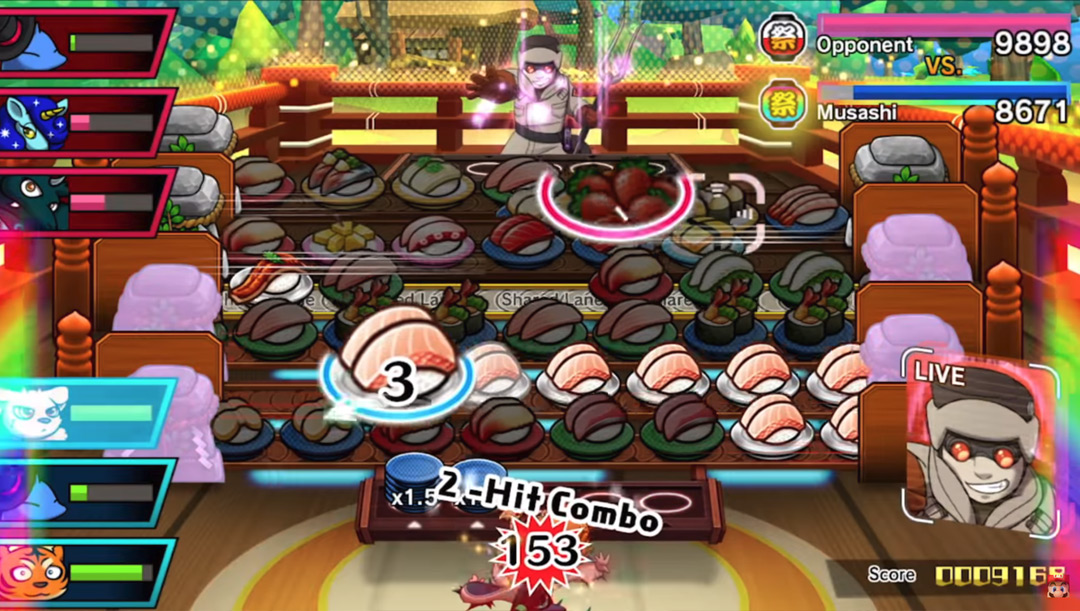 Depth is added using quite a few mechanics but the big major one is the inclusion of Sushi Spirits. These lovable Pokémon-esque creatures all have their own power or “skill” as they are called in-game. These help control or change certain things as you play, such as providing you with healing sweets to eat. Your Sushi Sprites can also undergo an awakening or essentially “evolve” into something else.

There are plenty of ways to progress in this game. Almost every mechanic can be upgraded. The player character can gain stamina and strength by leveling up, Sushi Sprites and their skills can be leveled, and even the sushi on the plates that you collect can be upgraded. Different items can help boost your Sushi Sprites, and there are even items that benefit the player character. It’s pretty expansive and thanks to the steady tutorial intertwined into the main story, it doesn’t feel as intense as I thought it would.

Sushi Striker: The Way of Sushido has a lot going for it. It’s a solid little package, with plenty of gimmicks to keep it interesting and it holds the player’s attention. I feel like this isn’t as an accomplished puzzler as something like Puyo Puyo Tetris, with a little too much random stick waggling when trying to find dishes to chain together. Personally, I don’t think that it’s worth the price tag. Regardless, anyone who digs the bright colours and quirky Japanese aesthetic should buy this, as you will more than likely have a blast.

Thanks for reading this post! If you liked it, then please follow this blog for similar updates in the future.